The inhaled oxygen reacts with fuel cells - sugar (glucose), fats and proteins -, pair producing energy avida. This is called cellular respiration. Energy is released from compounds called adenosine triphosphate (ATP). The compound is ATP in the mitochondria, located within the cell organelles.

If oxygen miss, Distributed by red blood cells, cells die and, therefore, the individual die, so it's hard to believe, but the presence of this oxygen, indispensable to life, is also responsible for the death.

During the process of energy production, or cellular respiration, within the mitochondria, 2% a 5% produce highly reactive oxygen molecules or radioactive. In essence, What happens, is that these molecules are atoms with an odd number of electrons - the electrons are negative particles that revolve around an atom's nucleus – , and need to be in pairs, or have high ability to react with any nearby structure, looking to steal an electron they lack, a process called oxidative or oxidation.

A molecule with an odd number of electrons are the famous free radicals. The causes of production of these molecules can be physiological, namely, arising from own natural organic processes or, then, of a condition which is there in the body.

Because free radicals have an odd number of electrons in its last layer, they seek to remedy the situation by capturing electrons of any atom to make a pair, called an oxidation reaction, modifying the structure and functioning of the attacked molecule, which becomes a new free radical. This new molecule with free radical is a deadly threat to the cell or structure to which it belongs. 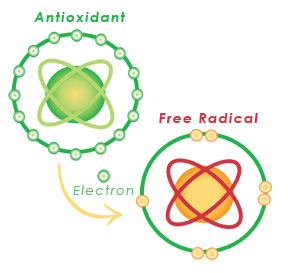 As normal and useful products, free radicals have beneficial effects when participating in the defense mechanisms against solid particles or microorganisms invading the body. Phagocytes are cell types of WBCs, able to do phone intake, for example, of offending bacteria. Free radicals oxidize and kill bacteria engulfed by white blood cells.

Free radicals oxidize the DNA of the chromosomes in the cell nucleus. The DNA itself can restore these oxidations, but when they are many, those that remain can cause mutations in genes. These mutant genes are able to lead to a successive cell division, by changing the overall ability to perform cellular work, favoring the carcinogenic processes, and also compromising the immune system.

A recent survey taken by Unifran (University of Franca), examined a substance present in oregano for liver disease. The substance is called as rosmarinic acid, It is commonly found in species of Boraginaceae and Lamiaceae subfamily Nepetoideae. However, is also found in species of other families of higher plants and some species of ferns and Ceratophyllum.

Rosmarinic acid is a natural phenolic compound and displays biological activities as:

Besides eliminating toxins, previne a anemia, aids in digestion, decreases gases (flatulence) and relieves rheumatic pain and joint among other.
However, the cellular mechanisms by which rosmarinic acid exerts its anti-inflammatory effects are not fully understood and requires further investigation.